Eight posts have met criteria for Volunteers to return. Invitations are out for five: Belize, Colombia, the Dominican Republic, Ecuador, and Zambia. And the agency just finished recruiting returned Volunteers for the next round of the Virtual Service Pilot.

After the Fall of Afghanistan, We Need the Rise of the Peace Corps

The United States needs to engage with the world — but not with top-down military-first policies. An essay from the co-founder and CEO of Netflix and the President of National Peace Corps Association.

By Reed Hastings and Glenn Blumhorst

We Can Do It! Again!

The U.S. is profoundly polarized — politically, culturally, socially, and economically. That was true during the Gilded Age, too. Halfway between then and now, John F. Kennedy exhorted his fellow Americans, “Ask not what your country can do for you — but what you can do for your country.” So what happened? And how do we turn things around?

From the Editor: Sixty years of Peace Corps. Volunteers returning to service. And a first for this magazine.

In a time of partisan rancor, the House Foreign Affairs Committee passed the bill with ringing bipartisan approval: a vote of 44 to 4. 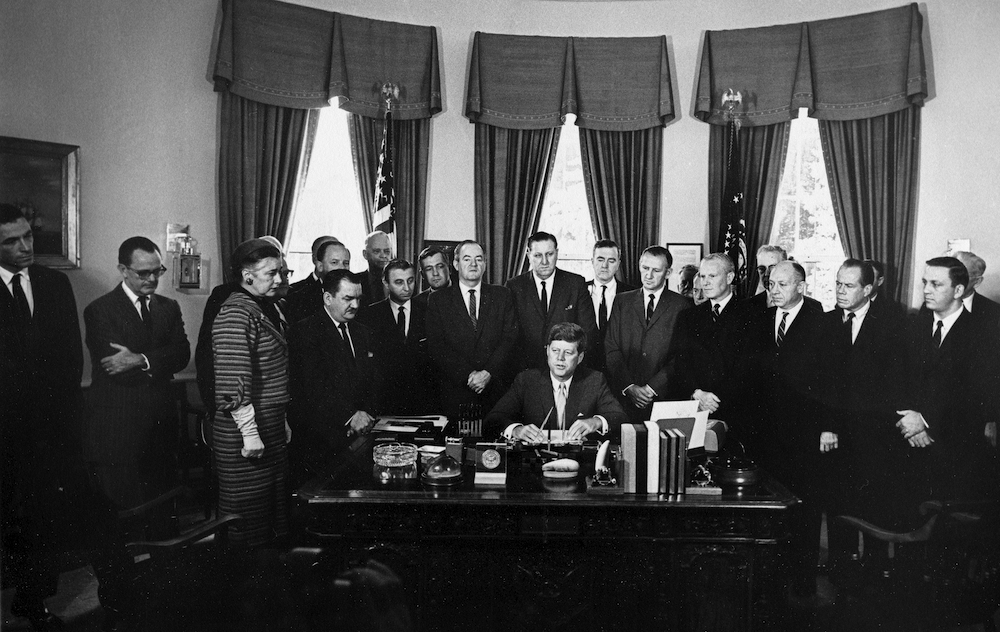 When President John F. Kennedy signed the Peace Corps Act into law, it permanently established the Peace Corps as an independent agency. But forging the legislation and getting it through Congress didn’t happen on their own. We take a look at those beginnings and share some stories few have heard. And we look ahead to what the Peace Corps must become.

Honoring Those Who Have Served

A wreath-laying ceremony at the John F. Kennedy Memorial at Arlington National Cemetery on September 22, 2021.

Snapshots from Six Decades of Service — and the Wider World

A timeline of some moments that have defined the Peace Corps from 1960 to today. Plus a year-by-year look at countries where Peace Corps programs began.

“I signed onto the Peace Corps Reauthorization Act because we need volunteer service now more than ever to support healthy & resilient communities … #PeaceCorpsNow.”

on Twitter on September 22, 2021, marking the 60th anniversary of the signing of the Peace Corps Act. McCollum also circulated a “Dear Colleague” letter in fall 2021 calling for robust Peace Corps funding.

Mirror the Face of Our Nation

The past: The program you may not know about that inspired JFK. The future: How we change what America looks like abroad.

“You’re continuing a legacy and making sure that in the future the Peace Corps looks like the United States,” says Rep. Karen Bass. Conversations hosted as part of the Ronald H. Brown Series, hosted by the Constituency for Africa and sponsored by National Peace Corps Association.

We need to have a diverse and talented corps of professionals in our foreign affairs agencies — and in the wider development community. That matters when it comes to leadership and credibility alike.

An Inclusive State Department Is a National Security Imperative

Our public service institutions, whether it’s Peace Corps or the Department of State, must do better. And your work is how we change that.

Operation Crossroads Africa and the “Progenitors of the Peace Corps”

The program you may not know about that inspired JFK. And that has been sending U.S. volunteers abroad since 1958.

Don’t Look for Representation, Look for a Systemic Problem Solver

Part I of a discussion on “Building a Community of Black RPCVs: Recruitment Challenges and Opportunities.”

Put Together Skill, Knowledge, and Commitment with Opportunities and Support

Part II of a discussion on “Building a Community of Black RPCVs: Recruitment Challenges and Opportunities.”

Part III of a discussion on “Building a Community of Black RPCVs: Recruitment Challenges and Opportunities.”

Highlights from the 60th-anniversary conference for the Peace Corps community.

Mobilizing for a Lifetime of Service and Impact

No Volunteers in the field. Battling COVID-19 — and the global rollout of virtual volunteering. Remarks and Q&A with Acting Director of the Peace Corps Carol Spahn in conversation with NPCA President and CEO Glenn Blumhorst.

Peace Corps Safety and Security: Looking at a Decade of Legislation for Change

Update: Preventing, Reporting, and Responding to Sexual Assault in the Peace Corps

So returned Volunteers are rallying to try to fix that. And NPCA is working with them to help.

A tribute from Representative Andy Barr in the House to Returned Peace Corps Volunteers who have helped him understand the value of their service.

Global Seed Savers has trained more than 5,000 Filipino farmers in seed saving, established three seed libraries, and is building a movement across the country to restore the traditional practice of saving seed and building seed sovereignty.

What began as an effort by five people to support refugees has grown to a network of 1,200 individuals. And they have led the way in the Peace Corps community in working with refugees during the current Afghanistan crisis.

Nancy Kelly of Health Volunteers Overseas and Amy Maglio of the Women’s Global Education Project are recognized with the Deborah Harding Women of Achievement Award. Estee Katcoff, founder of the Superkids Foundation, is recognized with the Kate Raftery Emerging Leaders Award.

Honors from the Library of Congress for Friends of Tonga

On December 2 the agency premiered a film chronicling the work by Peace Corps Response Volunteers in 2021 to help fight COVID-19 in the United States.

National Peace Corps Association hopes to host in-person meetings as a part of Capitol Hill Advocacy Day on March 3, 2022. Definitive plans should be available in January.

Opinion: Missing from the Conversation

I was a combat interpreter in Afghanistan, where cultural illiteracy led to U.S. failure.

We wanted to understand the world through action, and we wanted to serve. That changed the path of my life.

In the toolbox for Donald Lu in his new role in South and Central Asian Affairs at the State Department: diplomacy, advocacy, assistance, and learning from the past.

Patrick Gonzalez takes on responsibilities tackling climate and biodiversity with his new post in the White House Office of Science and Technology Policy.

The U.S. government has put forward for the first time a national strategy on gender equity and equality. A top priority: end gender-based violence at home and globally.

Javier Valdés (Guatemala 1999–2001) takes on responsibilities as U.S. Director of Civic Engagement and Government for the Ford Foundation.

Maurice Lee was recognized with the Robert Wood Johnson Foundation Award for Health Equity for his work with St. Vincent de Paul’s Virginia G. Piper Medical and Dental Clinic in Phoenix, Arizona. Bennett VanOudenallen received the GRAMMY Museum’s 2021 Jane Ortner Education Award for teachers who use music as an academic tool in the classroom.

William Dennis Grubb: “One of the First and One of the Best”

Dennis Grubb left college at age 19 to serve in the Peace Corps in Colombia. And for many in the 1960s, he literally became the face of the Peace Corps.

Susan Neyer Taught, and She Nurtured the Peace Corps Community in California, Nationally, and Beyond

He was a scholar, teacher, film producer, and worked with emerging Black political parties in South Africa.

Jeremy Black Was Committed to Nonviolence

After his life was ended far too soon, his wife has carried forward that commitment.

David McGaffey Served with the Peace Corps in Afghanistan, Then Embarked on a Career in Diplomacy

With the Peace Corps, he and his wife helped set up the first high school for girls in the town of Farah. As a diplomat in Iran, he helped evacuate hundreds of U.S. citizens.

Kindred spirits both — and they helped shape the early years of the Peace Corps.

Reader Comments on the Summer 2021 Edition of WorldView

Get the print edition of WorldView 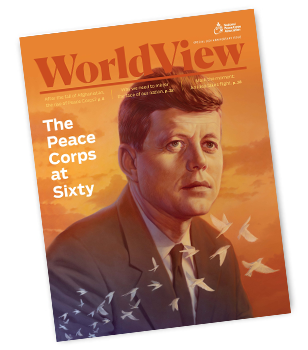 WorldView magazine brings you stories from and about the greater Peace Corps community, with connections to the wider world. We feature news, profiles, commentary and analysis, politics, arts, and ideas with a global perspective. We publish quarterly in print, with digital features throughout the year.

Receive the print edition by joining National Peace Corps Association at any level.
SIGN UP. You can also make a gift to ensure we can send the print edition of the magazine to everyone who wants to receive it.

Earlier editions are available on the WorldView app. Print copies may be available as well upon request. Write us and ask.

We welcome pitches and, on rare occasions, completed pieces. What are we looking for? Stories that speak to the Peace Corps community. That might be focused on work connected to Peace Corps, returned Volunteers, communities and countries where Volunteers have served, connections to experiences and work in the U.S. and globally. We’re interested in ideas and impact and stories that connect with readers on a human level.

Steven Boyd Saum is editor of WorldView. For more than two decades he has edited award-winning magazines in the San Francisco Bay Area. His journalism, essays, and fiction have appeared in Orion, The Believer, Creative Nonfiction, The Kenyon Review, Christian Science Monitor, on KQED FM, and in other magazines and newspapers in the U.S. and internationally. He served as a Peace Corps Volunteer in Ukraine, where he also directed the Fulbright program and hosted a radio show. Send a letter to the editor: worldview@peacecorpsconnect.org.

Sign up to receive WorldView digital with our app, including searchable archives and digital exclusives.

2. Then download the app from the iOS store, Google Play, or read the mag on Flickread on your computer here.

Advertisers: Reach the Peace Corps community throughout the United States — and around the world. Find out more about how to advertise with us:

What Our Readers Are Saying

“I would like to thank you for all of the amazing work you put into WorldView magazine. Reading it gives me a great feeling of solidarity with other Volunteers and RPCVs around the world and always serves to remind me that I’m part of something very special, and something that is much bigger than I am.”

“I have read WorldView for years now and it was FABULOUS to get at post. It’s important to know someone, somewhere out there is doing what you are doing, with a twist, and that’s what keeps Volunteers serving and communities asking for more … this publication really does make a difference.” 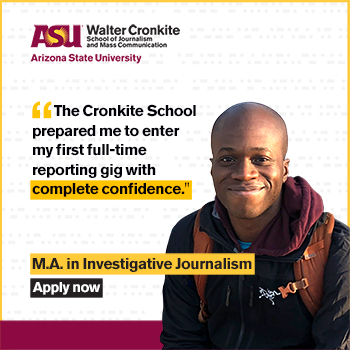 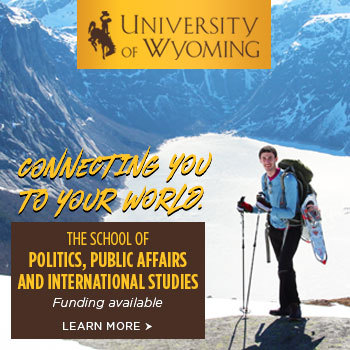